How to Succeed in the Introductory Finance Course (or any other one, for that matter)

I've probably taught the introductory finance course 25 or 30 times over my career, with well over 1000 students having passed through my classroom doors.  I would estimate that 20-30% of the students taking the class fail it each semester (and colleagues at other schools have a similar experience).  As a service to the students (and the profs who hate having to fail them), I thought I'd put down a few thoughts about what separates the successful students (the A and B ones) from the marginal ones (C students) and failing ones (the D and F students).  So, whether you're taking the course for the first time or the fifth, here are some "do's and don'ts."  It's important to stress that these aren't just strictly applicable to Intro Finance - they hold for a surprising number of courses.

Posted by Unknownprofessor at 1:05 PM 963 comments: 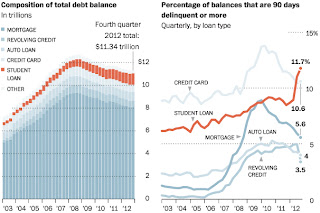 Posted by Unknownprofessor at 8:29 AM 231 comments:

Posted by Unknownprofessor at 9:02 PM 136 comments:

Cat Abuse and Technology - Be Still, My Heart

A Dutch artist named Bart Hansen recently decided to memorialize his dead cat (Orville) in an unusual way - by turning it into a remote-controlled helicopter. Jansen said that Oville always loved birds, and now he can fly with them.


Unfortunately, he forgot the laser beams.  Amateur!
Posted by Unknownprofessor at 1:06 PM 61 comments:

Department of "What Were They Thinking?"

Unknown University has a new initiative.  They want to encourage more "interdisciplinary" research.  So, they're trying to hire in groups centered around "big" topics.   So what do they call this approach?

The 7 Habits of Spectactularly Unsuccessful Executives (and Deans)

Just came across this article (The 7 habits of Spectacularly Unsuccessful Executives) in Forbes. It seems like the same characteristics can be applied to Deans (and College Presidents), since they're just executives of a different type. Read the whole thing, but here's the 7 habits (in some cases, I've edited them a bit)
I've known deans that embody 2, 3, 4, and 6. How about you?

Someone Need an A$$ Whoopin?

This reminded me of my childhood. My father's "weapon of choice" was his slipper. That may sound funny, but he could really whip that thing. Different times.

I swear, one time he made that thing go around two corners.

HT: Adam Yore
Posted by Unknownprofessor at 11:02 AM 41 comments:

Fly Away, Little One. Be Free!

It's been a good couple of days:
All in all, a nice way to close out the year. Now I just have to get the TV set up in time to watch the Lesnar/Overeem MMA fight on Friday.
Posted by Unknownprofessor at 3:22 PM 57 comments:

Email ThisBlogThis!Share to TwitterShare to FacebookShare to Pinterest
Labels: A Day In The Life, Family, Random Bits

The Semester Goes Out Not With a Bang, But With a Whimper

I was just commenting to the Unknown Wife how this semester was ending going so well compared to previous ones - my student managed investment fund presentation was done a day earlier than usual, my principles class was ahead of schedule, and my exams were at the beginning of exam period rather than near the end.

I should have known - never say things like that. Even in jest.

So, what happens? I was cutting and pasting items from the grades spreadsheet for my principles class (it has four components, all on separate tabs of the worksheet). Somehow, I not only deleted the grades for all three exams, I copied the sheet to a file name that overwrote the backup (I always save the spreadsheet to a new file name after each update). After searching for over an hour, I finally found an email backup copy I'd made that had everything but the final exam grades.

The morals of the story:
On a more pleasant note, a couple of bright spots this week:
In any event, here's wishing a Merry Christmas (or whatever else you choose to celebrate this time of year) to all my readers (all three of them).

It's finally feeling like Christmas in the Unknown Household - we've got Christmas songs playing on the radio, Winnie the Pooh (the Unknown Son's (a.k.a. Knucklehead's) recent fascination) on TV, and I'm in the middle of making up a quadruple batch of pumpkin soup on the stove A double batch will be for our neighborhood party tonight and another is for the big family get-together at our place on Christmas Day. So the place sounds and smells like Christmas.

mythe Goddess made me save my grade spreadsheet to the wrong name
Posted by Unknownprofessor at 8:56 AM 40 comments:

Email ThisBlogThis!Share to TwitterShare to FacebookShare to Pinterest
Labels: A Day In The Life, Family, Grading
Older Posts Home
Subscribe to: Posts (Atom)