A colleague just pointed out a great article in the New York Times, titled "The Default Major". Here's a few choice pieces:

Business majors spend less time preparing for class than do students in any other broad field, according to the most recent National Survey of Student Engagement: nearly half of seniors majoring in business say they spend fewer than 11 hours a week studying outside class. In their new book “Academically Adrift: Limited Learning on College Campuses,” the sociologists Richard Arum and Josipa Roksa report that business majors had the weakest gains during the first two years of college on a national test of writing and reasoning skills. And when business students take the GMAT, the entry examination for M.B.A. programs, they score lower than students in every other major.

Donald R. Bacon, a business professor at the University of Denver, studied group projects at his institution and found a perverse dynamic: the groups that functioned most smoothly were often the ones where the least learning occurred. That’s because students divided up the tasks in ways they felt comfortable with. The math whiz would do the statistical work, the English minor drafted the analysis. And then there’s the most common complaint about groups: some shoulder all the work, the rest do nothing.

“I understand that teamwork is important, but in my opinion they need to do more to deal with the problem of slackers,” says Justin Triplett, a 2010 Radford graduate who is completing his first year in Radford’s M.B.A. program. From his perch as a teaching assistant, he estimates that a third of students in the business school don’t engage with their schoolwork. At Radford, seniors in business invest on average 3.64 hours a week preparing for class, according to the National Survey of Student Engagement.

One senior accounting major at Radford, who asked not to be named so as not to damage his job prospects, says he goes to class only to take tests or give presentations. “A lot of classes I’ve been exposed to, you just go to class and they do the PowerPoint from the book,” he says. “It just seems kind of pointless to go when (a) you’re probably not going to be paying much attention anyway and (b) it would probably be worth more of your time just to sit with your book and read it.”

How much time does he spend reading textbooks?

He adds: “It seems like now, every take-home test you get, you can just go and Google. If the question is from a test bank, you can just type the text in, and somebody out there will have it and you can just use that.”

Let's see - the students don't study as much, they minimize effort, cheat on take-home exams, and don't come to class prepared.

These sound like things I've heard my own colleagues say in the hallways at Unknown University.

Nothing new. But somehow, there are professors in my school (several come to mind without much effort) who hold the students to high standards AND get top evaluations. The common threads in their classes is that they DEMAND that students come to class prepared and cold-call from day one. And they make classroom performance (either measured by the quality of participation or by numerous in-class quizzes (often of the unannounced, "pop quiz" variety) a major part of the grade.

Of course, they work a lot harder than the other professors in the classroom, but DUH.

Students will slack, not go to class, and cheat like crazy if all the instructor does is read off PowerPoint slides and give softball take-home assignments. They're rational, after all.

I view the course design (of which the grading scheme is a major part) as a mechanism design problem. In other words, it's an exercise in putting together a grading scheme that forces the students into behaviors that I want them to engage.

For the most part, they're rational - they'll find a way to get the grade they want while minimizing effort. The trick is to set the class up so that they can't slack. Unfortunately. that's harder than the old "30% of the class grade is based on the mid-term, 50% on the final, and 20% on quizzes" structure.

But it's possible.
Posted by Unknownprofessor at 12:02 PM 5 comments:

Email ThisBlogThis!Share to TwitterShare to FacebookShare to Pinterest
Labels: A Day In The Life, Academia, Teaching

It was another nice day today (but windy as all get out). So, I did another 17 1/2 mile ride. Yesterday, my feet were freezing (it was about 50 degrees). Today, it was warmer (no need for a jacket), but the wind was brutal - over 20 mph at times.

Still, it was good, and about 5 minutes faster than yesterday for the same course. I was pretty tired after yesterday's ride, but the forecast says rain for the next few days, so I figured I'd take the ride when I could get it.

I must have gone harder than I thought, because about three hours later, I got a hamstring cramp of truly biblical proportions. Luckily, the Unknown Family was out of town, because I actually yelled (and loudly)

But given the chance, I'd take the ride again if I could. It's biking season!
Posted by Unknownprofessor at 7:41 PM 8 comments:

Email ThisBlogThis!Share to TwitterShare to FacebookShare to Pinterest
Labels: Cycling

The First Ride of the Season

Up until the last two weeks or so, I've been getting up at least 5 days a week at 4:30 and working out at the local YMCA from 5-6 (mostly spinning on the stationary bike). As a result of this and watching my diet, I've dropped about 15 pounds since the beginning of the year. So, I'm about the same weight at the beginning of biking season that I usually am around mid-Jul. I was wondering how this would translate to actually being on the road.

Today I found out - I took my first ride of the season, and went about 17 1/2 miles (about twice what I usually do at the beginning of the season). Despite the relative cold (about 52 and windy as all get out), it was pretty easy - I was able to keep my heart rate under 150 pretty much the whole way (except for the last 50 yards of a steep half-mile long hill at the 8 mile mark). So, it looks like it'll be a good riding season.

I'll be riding in the Angel Ride, a 50 mile fund-raiser for the Hole In The Wall Camp over Memorial Day Weekend, so I need to get with it. It's actually the second day of a two-day ride where they go the length of northern Connecticut (from the northwest corner to the northeast corner - about 80 miles) the first day, stay at the camp over Saturday night, and ride down the eastern border of Connecticut (northeast to southeast - about 50 miles) the second day. I'll be as part of a group that includes two guys from my weekly bible study and a lady from my wife's grief group (she lost a daughter to cancer a couple of years ago).

And finally, there's only three weeks left to the semester - yeah, baby!
Posted by Unknownprofessor at 6:04 PM 8 comments:

As I've mentioned before, I'm a big fan of using pre-recorded videos as resources for my students. I've been wondering if they would be attractive to others.

I recently came across a site called MindBites - they provide a platform for the distribution of video content online. Basically, they're an iTunes-type store for instructional videos. So, I uploaded my tutorials (so far, only the first two) for the Texas Instruments BA 2+ calculator, and priced them at $0.99 each (pretty much an iTunes model). I'm curious to see if anyone buys them.

Since I'm already putting much of my core Introductory Finance Class into short videos as a resource for my students, I'll post them to the Mindbites site as well. I figure there might be someone who's willing to pay a few bucks for (as an example) a series of 5 videos (about 3 hours alltogether of lectures on Time Value (with examples for using the calculator, the formulas, and Excel spreadsheets). If not, at least I'll have them done for my classes.

In case you're interested, the videos can be found here. If you decide to download them (the site takes PayPal), leave a review.
Posted by Unknownprofessor at 12:36 PM 5 comments:

Posted by Unknownprofessor at 11:39 AM No comments: 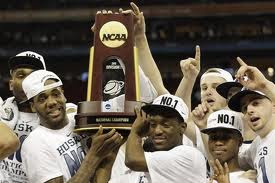 My undergraduate alma mater won ugly, but they won. And since it's not gymnastics or diving, there are no points for style.

I think I'll give my students a couple point bonus on their exam Thursday because I'm in such a good mood.
Posted by Unknownprofessor at 3:43 PM 2 comments:

My Picture With Bill Walton

I just got back from the R.I.S.E. conference in Dayton. There were some pretty good sessions, and my students got a lot out of it (as usual). The highlight for me was hearing Bill Walton (the "World's Tallest Grateful Dead Fan") speak -- I grew up a Boston Celtics fan, and he closed his career (as the quintessential Sixth Man) with them.

He was an exceptional speaker - since he's only 5 years older than me, his illustrations and anecdotes were a real trip down memory lane. Also, he's gone through some major stress: he's had over 60 surgeries on his back and feet, and spent almost two years on the floor due to spinal problems. At one point, he was so depressed and in despair that he contemplated suicide. So I get where he's coming from.

Now, only a few years after having his spine pretty much surgically reconstructed in an amazing medical procedure (they basically built an internal support cage around his spine), he's cycled 100 miles across Death Valley.

And yet, the recurring themes of his talk were family ("there's nothing like the pride of a father") relationships, and a whole lot of John Wooden memories. There's something about major crap happening to you (and I know that of which I speak) that gives you perspective.

As a father, cyclist, beate up former jock, and child of the 70s, I can say that I've heard few talks that affected me as much.

Afterward, we (I and my two students) got a chance to get our picture taken with him. Since I operate under a pseudonym, I cut out everyone's face. But just to give you a sense of proportion everyone's head (except for Walton's) is cropped just at the top of the head - I'm about 5' 7"", and the taller of my two students (the one to my left) is 6'2"". The top of my head was about a good half a foot below Walton's chin- it looks like he's standing on a chair. He is an absurdly tall man.

Now THAT was cool. 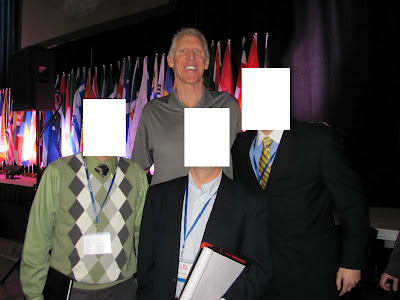