Every semester, I get a handful of students who come up to me and say something like "UP, is there anything I can do for extra credit? I reeeeeaaaaalllly need to pass this class". So this time, I thought I'd let students self-select up front instead of whining ex post.

I have about a 6-7 extra credit assignments for my investments class. I parcel them out one by one, with a deadline for each. Most will involve some kind of Excel assignment that will drive home a class topic, and will take an hour or so. If they complete an assignment by the deadline, they get one or more points added to the next exam.

I mostly have juniors in my investments class. They should currently be in the midst of applying for internships. Since they can't apply without a resume, I thought that giving them a point on the exam for simply having a resume review done by our college career services person was pretty much a no-brainer.

The end result - only three out of 21 students had the resume review done and got the points. And of course, they were my top three students.

Ah well. At least this makes it pretty easy to answer the students who darken my door in the last week of the semester looking for extra credit.

As usual, The Far Side has something that's on point. 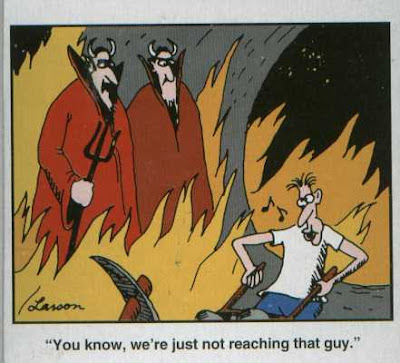 Posted by Unknownprofessor at 8:05 AM 2 comments:

Your Time-Wasting Moment Of The Day

Since we're at Hump Day + 1, I thought I'd post something humorous. The Unknown Daughter loves shows where someone ends up in a puddle of mud, slime, goo, or anything disgusting. So ABC's Wipeout was right up her alley. Here's a clip of their top ten:

I'll confess, I've also let her watch some episodes of Most Extreme Elimination Challenge (with the volume off because of some of the double-entendres) when the Unknown Wife wasn't around.

Based on early evidence, it's pretty likely the Unknown Toddler will als have similar tastes.
Posted by Unknownprofessor at 9:24 AM 2 comments:

I'm less of a man than I used to be

Those of you who know me in my "real" identity also know that I've put on a lot of weight over the years. Some of it was stress, some due to the fact that I like food (after all, I haven't found anything better to eat), and a lot was just that when life gets busy, it's harder to find time to get to the gym.

I figured I either needed to get my self back in shape or start renting advertising space on my butt. And while there's plenty of space, there doesn't seem to be much demand.

The Unknown Wife works out at the gym from 6-7 with a neighbor. So, I figured I'd work out from 5-6 (the local YMCA opens at 5, so this means I wake about 4:30 or so). Once my medical issues from the summer cleared up, I started putting in about a half hour on the stationary bike each morning (and occasionally, some light weights). I figured I'd start with just exercising and not worry about diet at first - try too many things, and I'd just burn out.

Then, after the start of the year, I got an app for my smartphone called MyFitnessPal. It allows me to enter and track what I eat (calories) and my exercise throughout the day. So now, I get regular feedback (i.e. "if I eat this, I only have 500 calories left for dinner, but if I eat that, I get 800 calories"). As a result, I've been pretty much able to stick to a "net" 1500 calorie per day diet (i.e. I can consume 1500 calories PLUS any additional calories I burn off through exercising).

Net result so far -- I've lost about 7 pounds (and well over an inch around my waist). since the start of the year. Now I only have another 11 pounds to go. If I pull it off, it will mean a 10% body weight loss in about 4 months' time, and I'll be lighter than I've been in over 12 years.

In fact, If I only lose another 5 pounds (which I should by the end of March), I'll be lighter on April 1 than I usually am in August after almost 3 months of cycling. This means that if I can keep the spinning and weight loss up until all this global warming leaves us and I get my wheels back on the road, this should be a good year for cycling - less weight means faster pace/longer rides..

I've also had chronic intermittent back problems (another thing I got from my father). So, I've been going to a yoga class called "yoga for stiff guys" run by the father of the Unknown Daughter's best friend. Now, for the first time in probably 12 years, I can stand with my legs straight and put my palms flat on the floor.

So all in all, things are good. Now if I can only get these papers under review...

update: The only downside of this schedule is that I'm generally beat and in bed by 9:30 (not really a downside, since all I miss are garbage t.v. shows). The other night, I decided to read a bit before bed (I went up around 9). A half hour later the Unknown Wife came in to see me sound asleep with a book over my face. Luckily, she didn't have the presence of mind to snap a photo.
Posted by Unknownprofessor at 9:54 AM 1 comment:

It's Time for Some Testosterone

As my students and some of my friends know, I'm a big MMA (Mixed Martial Arts) fan.

I did Tae Kwon Do in high school and competed in Judo in college, so I can appreciate a lot of the technical aspects. Thanks to the Judo, I particularly enjoy what happens on the ground in the submission game. In fact, in my first competition, I got chocked unconscious, which was pretty cool. It wasn't the last time, either - when we'd visit one dojo, there was a tradition that every new guy had to get choked out - kind of an initiation rite.

I gave up the judo fairly quickly, because I don;t have the body for it - have a tendency to get joint injuries. In the space of 2 years, I got a mildly separated shoulder, a torn rotator cuff, two dislocated elbows, and a severely bruised knee. To add insult to injury, since I was in the lightest weight class (131 lbs - those were the days, and are long gone), I ended up competing against kids who were 10-15 pounds lighter but had been doing judo since they were 6. In fact, one of the shoulder injuries was given to me in practice by a 14 year old, 116 pound girl who threw me around like a rag doll (in fairness, she was junior national champ the year before).

In any event, it looks like tonight's card will be a great one - the Silva/Belfort fight should provide some real fireworks, the Franklin/Griffin one should be a real crowd pleaser, and the Jones/Bader is another one I've been looking forward to.

Best of all, my local Applebee's shows the fights for free. So for the cost of getting it on cable pay-per-view, I get beer and munchies and still come out ahead.
Posted by Unknownprofessor at 12:20 PM 3 comments:

After I posted my video on security market indexes, I received a number of emails and messages asking questions on how I make them. So, I thought it would make for a a good post. So think of this a a FAQ on making videos for use in the classroom (or elsewhere).

1) What software do you use?
I use Camtasia, which is made by techsmith. It costs $299, but is available to academics for $180. Many universities make it available to faculty for free off a server, so check with yours to see. You can download a fully-functional 30-day free version to get started. You also need a headset with a microphone - using the computer's built in one doesn't work very well. There are other packages that do the same thing, but most people I know that are doing this are using Camtasia.

2) How does it work? Is it complicated?
Camtasia is what is called "Screen recording software". Basically, it records whatever goes across your computer screen as it happens. So, if you're working through a PowerPoint slide deck or a spreadsheet, it records whatever goes on your screen and puts it into a video file. If you're narrating material as you go through the slide deck, it will record the narration to. Alternately, you could record the video and add a voice-over later.

You can then edit the video to put in call-outs, captions, etc... Once that's done, Camtasia will create videos in just about any format you want - flash, MOV, AVI, iPad, etc...

You can also combine snippets of different videos. For example, I will often record 5-10 minutes at a time, clean it up, and save it. I will then combine the individual snippets. This is helpful when I make an error and want to later correct it.

3) How long does it take to make one?
The most time consuming part of making a video is getting organized before you start - making sure your slides are clean, getting your comments organized, etc... (but then, that's true of any teaching). Once everything is clean and organized, I find that there's about a 2:1 to 3:1 ratio of video production time to video length. In other words, a video with a 30 minute run time might take me about an hour to 90 minutes to create. For shorter videos, the ratio is less - I find that I can usually talk for 5-19 minutes without making a gaffe, so I can usually do my shorter videos in one pass. For longer ones, I often make mistakes partway through and have to re-record some parts. Once feature that adds extra time in the production of longer videos is that I typically put in a table of contents, and doing that takes a little bit of time.

4) How do you use the videos in class?
There are a couple of ways I've used them.
5) How much do the students actually use them?
I haven't done any formal studies as to how much they're used, but when I post a new video, my total hits on the video is usually 2-3 times the number of students in my class. My guess is that this means that they might view it in its entirety once and then go back a time or two to see specific subsections.

6) I'm sold. How do I get started?
First, go to Techsmith's website and download the free 30-day trial. Then watch a few of their instructional videos (they've done a great job with these, by the way). Then, get yourself a headset (mine cost about $50 from Staples. Finally, if you want more help, Dan Parks has written an excellent (and inexpensive) book titled Camtasia Studi 6: The Definitive Guide. It's for the older version (the current version is version 7), but the basics are all there.

Finally, when you make a good video, let me know (I can always use more resources).
Posted by Unknownprofessor at 8:00 AM 1 comment:

Due to severe inclement weather (ice storm), less than half of my investments class showed up on Wednesday. The topic (market indexes) seems to give some of them trouble. So, rather than either go over it again in the next class (and make those who attend have to sit through it twice) or just move on (and leave those who clearly had a reason for missing class hanging), I put together a video on the topic. Since it's done, figured I might as well share. It's not professionally done by any stretch, but it's not bad (it runs about 40 inutes, but has a table of contents that whould allow you to jump back and forth). Enjoy.

NOTE:if the video doesn't come up, try this link.
Posted by Unknownprofessor at 3:37 PM No comments: