I'm writing the semester's first exam for my fixed income class. As usual, I'm not looking forward to the grading (this time, I am NOT giving them any short answer questions - their answers are anything but). I'm hoping at least one of my students can come up with an answer like one of these:

For some reason I found this one (#18) particularly amusing. But you can choose your own: 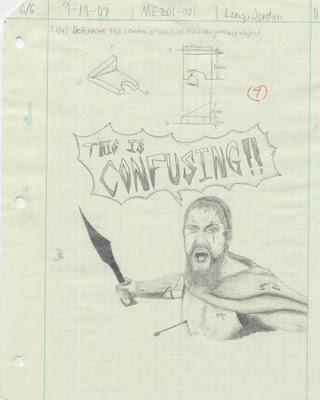 Posted by Unknownprofessor at 7:41 AM No comments:

Professor's Epic Email Response To a Tardy And Entitled Student

Like most faculty, students coming late to class bothers me - it disrupts the class, interrupts my train of thought, and in general causes a negative externality. In previous years, the problem seems to have gotten worse - in some classes, 15% would wander in after class has started. So this semester, I borrowed a page from a colleague's book. He teaches law for our B-School, and is a former partner for a major Wall Street Law firm. He's very formal in class, is known throughout the school as a fantastic professor, and a bit of a hardass (formal, but a hardass).

So now, whenever a student walks into class late, I merely stop talking in mid sentence. I then quietlty wait until the student is seated. At this point, they're usually embarrassed. I continue waiting they have their book AND pencil out. Of course, the spotlight on them makes them extremely uncomfortable. I don't ream them, don't make any faces, comments, or do anything else - merely ask "Are you ready now?" Then I take up right where I left off. It's kind of fun, and I don't have to come off like my usual sarcastic self. It seems to work pretty well - late arrivals have really dropped off this semester.

But this guy (Scott Galloway at NYU) just throws them out if they come in late. A student got the treatment recently and sent him a (to my ears) somewhat entitled email. Galloway give him an epic reaming.

Read the responses - they're classic (particularly the David Mamet references). If you have any favorite techniques for dealing with late students, feel free to share.

Of course, as they say in the ads, "your mileage may vary".

HT: Craig Newmark (who gets it)
Posted by Unknownprofessor at 10:50 PM 1 comment:

Email ThisBlogThis!Share to TwitterShare to FacebookShare to Pinterest
Labels: A Day In The Life, Teaching

As several readers have noted, I haven't been posting much lately. Mostly, I've been working - trying to get ahead in my classes, working on research, and in general keeping a low profile. So, here's a brief update on things.

As usual, I've been juggling a couple of projects. One is (finally) just about done - it's been going on for a couple of years now, but the end is in sight. With luck (and, more important, some discipline), it should be done in the next couple of weeks. And then it'll get sent out to the Journal of Banking and Finance (not a top-tier journal, but pretty good). Then I work on another piece that will get sent to Financial Management (about at the same level).

Meanwhile, I'm also working on an accounting piece that will be sent to the Journal of Accounting, Auditing, and Finance. SO, with a bit of luck, I should shortly have three pieces under review at pretty decent journals.

Meanwhile, in the last two weeks, I've received three papers to review, so it;s time to start working on those. It's odd - nothing for a year, and then three in a week. Ah well.

While this is going on, I've been teaching (of course). Last semester, I had three "preps" (a "prep is a unique class you must prepare for - so three preps means three separate classes), of which one was a new one. This semester, I have only two preps, and neither one is a new one. So, I've actually been getting things done.

Finally, things have been good in the Unknown Household. Unknown Baby Boy is crawling, and starting to make words - so far, he does "Da Da" and a pretty good imitation of an explosion (what can I say - he's a Boy Child). The Unknown Daughter continues to impress everyone with her writing skills (she recently described her mom and friends as "overly garrulous"), and has been reading up a storm.

Enough for now - my data awaits.
Posted by Unknownprofessor at 5:54 PM No comments:

Email ThisBlogThis!Share to TwitterShare to FacebookShare to Pinterest
Labels: A Day In The Life, The Unknown Family
Newer Posts Older Posts Home
Subscribe to: Posts (Atom)