Here's a classic role reversal story - a couple foreclosed on a bank! It started about five months ago when Bank of America attempted to foreclose on a Florida couple for non-payment of their mortgage.

The problem was, they'd paid cash for the house. So they went to court, and eventually won (they showed that they'd never had a mortgage with BOA).

The judge awarded them legal fees, but after five months, BOA somehow never got around to paying the judgement.

So, the couple's attorney got the sheriff, seized their assets and padlocked the bank branch building. The attorney gave instructions to remove assets like computers, desks, copiers, and any cash in the tellers' drawers. After about an hour of being locked out of the bank, the bank manager handed the attorney a check for the legal fees.

update: It wasn't technically a "foreclosure" on the bank - it was actually a default judgment for unpaid legal fees and court costs. But close enough for the irony.
Posted by Unknownprofessor at 1:52 PM 4 comments:

Email ThisBlogThis!Share to TwitterShare to FacebookShare to Pinterest
Labels: Banking

How Much IS A College Degree Worth? 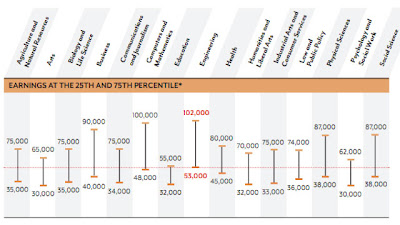 Here's an interesting chart from Lifehacker. It shows the median salaries (along with the 25th and 75th percentiles for various majors. It's taken from a report created by the Georgetown University Center on Education and the Workforce called "What’s it Worth? The Economic Value of College Majors"

Here's an interesting part from the press release Georgetown put out:

This isn;t surprising - with the exception of Pharmacy (which is also pretty rigorous and exacting), they're all fields that require a lot of math. To quote classic Barbie, "Math is Hard!". So there's a smaller supply of grads (and there's a pretty good demand for these grads, too).
Posted by Unknownprofessor at 12:34 PM 10 comments: