This is a bit belated - I started it, and then didn't finish before all family got here for the festivities. But better late than never, eh?

Here's hoping you all had a Happy Thanksgiving. It's a good exercise to occasionally thing about the things we're thankful for, so here's a few of the things I'm particularly thankful for:
As regular readers know, it's been a Hell of a year (and I do mean "Hell"), what with the Unknown Son losing his battle with cancer in June. But even with that, there are things to be thankful about. When he was diagnosed, it looked like he wouldn't last a year, as the cancer was both aggressive and resistant to treatment. But we had another five years with him, and got to see him grow into an amazing ten-year old boy. And we got to see his excitement at his new baby brother (and to see him relate to him for two months). In fact, here's a picture (it's the desktop background on my computer): 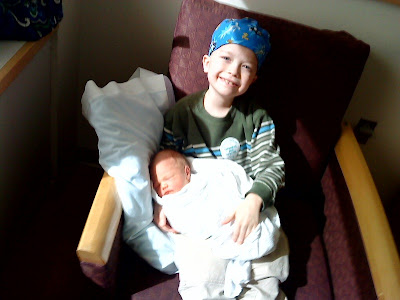 One of my favorite blogs (the Aleph Blog) is run by David Merkel, a CFA charter holder, portfolio manager and fellow Christian with eight kids. He just put up his own Thanksgiving post, and in it he mentions Job - the one book of the Bible that there never seem sot be a good time to read: when you're happy, it can bring you down, and when you're down, it can be even worse.

For those of you who aren't "people of the Book", it's about a wealthy, happy, and religious man who God allows Satan to test by taking everything from him - his wealth, his family, and even his health.

At the end, Job decides two things - that God is beyond his understanding, and that he'll still praise him regardless of his circumstances. So at the end of the day, being thankful is a choice. I've noticed that there are people who are generally happy and thankful, and those who aren't. More often than not, when I ask the happy ones why, the only common answer is that they simply choose to be happy.

In any event, it's time for a late breakfast, and then off to work.
Posted by Unknownprofessor at 8:55 AM 1 comment:

Email ThisBlogThis!Share to TwitterShare to FacebookShare to Pinterest
Labels: Holidays, The Unknown Family

SNL Takes a Chunk Out of Obama

Looks like SNL is finally starting to put Obama in the cross-hairs:

The funniest part (a little rude, but funny nonetheless) is about 2/3 of the way through - "Will you kiss me? I believe it is the polite thing to do when someone is doing sex to me!"

Not a good sign for the President - to this point, comics have been slow to start ragging him. Looks like the honeymoon's over.
Posted by Unknownprofessor at 6:24 PM 1 comment:

A friend just sent this. They call this guy (Robert Muraine) "Mr Fantastic" after the rubber-limbed comic-book hero in the Fantastic Four. Here's a clip of his entry on "So You Think You Can Dance".

I used to have what's called hyper-mobile joints (before I got old and still) - I could easily get my elbows well past each other behind my back, do full splits, get my feet behind my head, and so on.

But this is in a whole 'nother world.
Posted by Unknownprofessor at 9:20 AM 1 comment:

Email ThisBlogThis!Share to TwitterShare to FacebookShare to Pinterest
Labels: videos

Scott Adams Must Be Eavesdropping on My Email

This sounds like a couple of my students. For some reason, family deaths always seem to increase around exam time.

Posted by Unknownprofessor at 11:39 AM No comments:

Yesterday, I thought I was coming down with something - I had a sore throat when I went to bed, and I woke up this morning feeling kind of blah. So, I thought I'd muddle through my classes (unfortunately, it's my long teaching day), and then come home and go to bed. By the end of the day, I felt like I'd been beaten with a stick - sore and feeling heavy-limbed all over.

But, it was the Unknown Daughter's birthday, so we had festivities first.

Then, I thought I'd put in a little work on before going to bed. Big mistake.

I started working on some spreadsheet models for my Fixed Income class at about 9 (just for an hour or so, I thought). Before I realized it, it's 3 a.m., and I've stayed up too late once again.

So far, I've made two spreadsheet models. One calculates duration and convexity for any combination of coupon, maturity, frequency, and yield, along with some graphs. The other calculates the average life of a mortgage pass-through based on various prepayment assumptions (multiples of PSA). While they're not pretty (I'm not exactly a wizard at formatting), I'm pretty happy with them, because they both use fairly complicated (for me) nested IF statements.

Next up will be a model for a sequential-pay CMO. That should be fun.

I'll end up eventually turning all the models into video tutorials (probably over the break), and will assign them for the students to replicate the next time I teach the class.

My basic approach to teaching is that if they can't calculate it, they don't understand it. So hopefully these will help.
Posted by Unknownprofessor at 2:46 AM No comments:

Disclaimer: the following post is not for the faint of heart (or for those who have an overly developed sense of propriety). But then again, most of my readers aren't in those categories anyway.

Since I recently turned 50, I got to have that little procedure that comes with the turf - a colonoscopy. The actual deed wasn't bad at all, but the prelude was, shall we say, less than enjoyable. Since the docs want a clear "field of play". they make you go on a clear-liquid diet for the day prior to the procedure. So, I got to teach 3 classes on a diet of Jello, black coffee, and chicken bullion - not the easiest thing to do.

More importantly, they give you what they call "prep". the best way to give you a feel for what that involves is to point you towards this this classic video (warning: may not be safe for work - so turn the audio down a bit). The "prep" is essentially laxative mixed with rocket fuel. On the bright side, I got to read a couple of books I hadn't recently had time for while "parked" in the little room.

In any event, the actual procedure went fine, and there was nothing of concern down below deck. All I can say about it is "thank goodness for high-quality sedatives" - I went to sleep just before they started, and woke up in the recovery room after, with no memory of anything.

Once it was done, I grabbed lunch and went home to sleep off the remaining effects of the sedative (this took most of the afternoon). Of course, there was only one food that was appropriate for the first mean after waking. Luckily, since I married well above myself, the Unknown Wife was ready with pancakes and BACON for dinner.

For those of you that want a better sense of what the whole thing was like, no one says it better than Dave Barry. Just don't read it with any liquid in your mouth, or you'll be cleaning off your monitor (seat belt, indeed!). Then go sign up for a colonoscopy, if you are over 5o and haven't had one yet.
Posted by Unknownprofessor at 1:17 PM No comments: