It's been a while, so I thought I'd do a short Link Dump to clean out my Bloglines account:

That's enough for know - the June cleaning is now done.
Posted by Unknownprofessor at 11:42 AM 1 comment:

Like most faculty I know, I could stand to be more disciplined in my writing. There are times when I'm really productive, and stretches that I don't do anything. One tactic that has been extremely helpful (at least when I use it) has been keeping a writing log. Although I've mentioned this before, it bears repeating. Robert Boice (the acknowledged master of research on faculty productivity) did quite a few workshops on faculty productivity. He did a study where participants were put into three groups
I'm sure that there are some other issues that would effect this experiment, like self-selection. But the differences across groups are pretty striking.

So this time, to tweak things a bit, I set up a spreadsheet on Google Spreadsheets with a current student, a former student, and a regular coauthor of mine. We've all committed to record out writing time and output daily. It should be interesting--there's already been one day that I put in a half hour at 11:00 p.m. just to avoid having to show a goose egg for the day.

Ya gotta love accountability. I'll let y'all know how it turns out.

update: In case you're interested, two books by Boice that are well worth picking up are Advice For New Faculty Members (the title is misleading - I got a lot out of it even 6 years out of grad school) and Professors as Writers.
Posted by Unknownprofessor at 11:06 AM 2 comments:

Email ThisBlogThis!Share to TwitterShare to FacebookShare to Pinterest
Labels: A Day In The Life, Productivity, Research

And as a corporate person would say, reorganizations are extremely costly...

So far, seventeen years and no "reorganizations" in the Unknown Household.
Posted by Unknownprofessor at 1:45 PM No comments:

On The Road Again...

I'll be out of town for a few days (in Washington) meeting with some coauthors to work on a number of projects. They'll probably work me pretty hard, so blogging will likely be light until Saturday.

But it's not like I'm getting paid for this, so I don't feel too bad.

Now I have to suck up to (er, that is, er "meet") with the head of the alumni board and the VP of advancement (the university's fund raising area). We're trying to get more money out of them for our student managed investment fund. We're hoping that we can convince the alumni to let us "charge" a management fee that we can then use to fund some finance-related student activities (like scholarships for CFA study materials, sending a couple of student each year to the RISE Forum at the U. of Dayton, and so on).

update: The meeting went pretty well. Looks like our students might be getting some money. Woo Hoo!
Posted by Unknownprofessor at 11:17 AM No comments:

Email ThisBlogThis!Share to TwitterShare to FacebookShare to Pinterest
Labels: A Day In The Life, Student Managed Investment Fund, Travel

One argument for going to a top school is that you get to tap into the alumni network and make connections with classmates that will help you in future years. Here's some interesting evidence that it's true in the investment world. Cohen, Frazzini, and Malloy examined how school ties affected the investment patterns of mutual fund managers in a paper, titled "The Small World of Investing: Board Connections and Mutual Fund Returns." They examined whether mutual fund managers invested differently in a company when someone from their school sat on the board. They found that:
Here's a copy of the paper.

It's a pretty interesting piece - it appears that they superior returns weren't merely a reflection of the managers knowing more about the ability of the board member. The most telling finding was that the returns were concentrated around specific news events. Hence, they were more likely to be driven by "inside" information.

All in all a paper worth reading (or at least, discussing in class).
Posted by Unknownprofessor at 11:50 AM No comments:

Many of my readers (all three of them) are finance majors and at least somewhat interested in what the $$$ is like working on Wall street. Just how much can you make on Wall Street?

Luckily, a former classmate from grad school (and one of my three regular readers) just sent me this quick look (from DealBreaker.com) at the bonus side of the Wall Street Cheddar for Investment Banking analysts. These are median figures, by the way:

And this piece on WallStreetPrep.com gives the typical first year salary for analysts as being in the $55-70K range, with a signing bonus of about $10k. So, adding it all up. total first year compensation (not counting signing bonus) ends up around $145-$180K.

These are for analyst positions, which are the likely spot that an undergrad would start (the associates are usually MBAs).

This seems like a lot of money for a first job (and it is). But when you consider that the typical analyst regularly puts in 80-100 hours (or more) a week, it's like having two full time jobs (in fact, based on the emails I've gotten, 100+ hours isn't uncommon, and an 80 hour week would be considered a vacation by most bankers). That's too much like work for my tastes (which is why I'm an academic). But not surprisingly, thes jobs are highly sought after. If I was 22 again and wired that way, I'd' probably try to go that way too. But I'd end up burning out after a couple of years, even if I made it that far.

If anyone has similar figures for Venture Capital and Private Equity, let me know.

update: Here's another link to salaries and bonuses for traders (compliments of Jim Mahar at Financeprofessor.com)
Posted by Unknownprofessor at 4:19 PM 5 comments:

Not a Smart Move

For those of you who are A) writing a thesis, B) married, and C) want to stay that way, here's a good tip for your dissertation:

Compliments of phdcomics.com.
Posted by Unknownprofessor at 10:20 AM No comments:

This video of Mississippi Braves' (the Atlanta Braves' AA minor league team) manager Phillipp Wellman completely losing it shows just how much fun minor league baseball can be. At a minor league game, you see some pretty good players, but also a lot of bat-crazy antics. Even better, you're so close to the action you can just about see a losing-it manager foaming at the mouth. This reminds me - I have to buy some tickets to our local minor league team. It's time for the Unknown kids to see what a day at the ballpark is all about.
Posted by Unknownprofessor at 11:04 AM No comments:

I'm not teaching this summer - time for research (and getting in shape). But I wish I'd had this last semester around, oh, May or so. 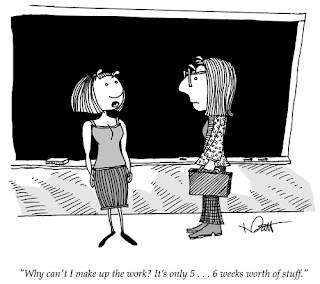 In case you're interested, there are plenty more good education-related cartoons at "Teachable Moments" (a regular feature at Inside Higher Education).
Posted by Unknownprofessor at 5:30 PM No comments:

In a previous life, I taught a pretty large class on personal finance. Among other things, this sparked my interest in scams and scamsters, and impressed on me the benefits of being able to negotiate well. So, I always spent a week or so on negotiating. But I never covered this one:

Posted by Unknownprofessor at 10:16 AM No comments: