Tell Us About Faculty Interviews That Went Bad

At the FMA, I talked to several candidates on the market (of course, their opening line was the traditional mating call of the new candidate: "are you hiring this year?"). Since by now they're through the experience, I thought they could use a bit of comic relief. .

I was out with a number of my friends in Denver. The topic turned to "interviews gone bad". Most of them had been in the field for at least a half-dozen years (and in most cases, twice or more that many). So we've all either been on an interview that (as Terry Pratchett would say) "went pear-shaped") or have heard of one - and in some cases we know stories from either side of the table. After hearing a few stories that made me laugh so hard that I almost wet my trousers, I thought this would make a great topic for a post.

To get the ball rolling, I'll share tow of my favorites (I wasn't personally involved in either, but heard them from one or more of the participants):

1) Sleeping Walrus University: My friend John (the name has been changed to project the guilty) likes to (over)partake of the fruit of the vine. One night, he overdid it in a major way. His school was interviewing, and unfortunately, they were holding interviews in the room he was sharing with another faculty member. The next morning came around, and he was hung-over, probably still mostly soused, and completely dead to the world (absent dynamite or a crane, he was not to be roused or moved). So, when the first interviewee of the day came in, the other two faculty members mad ethe best of the situation, and conducted the interview with John asleep in the bed, covered up completely by a mound of blankets.

John is not a slender man (he's somewhere in the Chris Christie weight and body-shape class), so the pile of blankets looked like someone had buried a walrus (or maybe a sea lion)under there. And to boot, John was snoring at rock-concert decibel level. So, every few minutes, an interviewer's question (or the candidate's response) would be punctuated by a loud "SNNNZZZZPPPPFT". I think the candidate might have gotten a campus visit out of it, but ended up taking a position elsewhere.

2) Yes, we believe in full disclosure: An older faculty member I know came on the job market in the late 1970. His most memorable interview was conducted in a poorly-lit hotel room. I know that it's important for the interviewer to feel comfortable, but this guy didn't quit get the concept. For some reason, he felt no need to wear pants, and conducted the entire interview wearing a t-shirt and his underwear (and no, my friend didn;t remember if they were boxers or briefs - he focused on making only eye contact). Sometimes less is NOT more, dude.

If you have other stories, feel free to put them in the comments. Please pass this along to your friends, because almost everyone either has a story of their own or knows of one. By all means, don't use your real name, and try to disguise or change enough details so that they can't be traced back to the parties in questions. I'll periodically promote the best ones from the comments up to the main post (note: I may make a few editorial changes for the sake of spelling, punctuation, extremely poor taste, anonymity's sake, or comic license).

So give me your best (or worst), and let's have some "inside baseball" fun.
Posted by Unknownprofessor at 12:01 AM 6 comments:

Back From The FMA

I just got back from the annual FMA (Financial Management association) annual meeting in Denver. I presented my paper, commented on a few others, set up some possibilities for collaboration (and possibly making so money teaching overseas), and spent a ;lot of times with old and dear friends (and made a few new ones)

I n particular, it seems like the Christian Finance Faculty Association is getting off the ground,. We had a good meeting on Friday with some stimulating discussion and a chance to meet new friend (some of whom we've known for years but didn't realize they were Christian.

We're in discussions about starting a blog, and when It's up, I'll pass it along.
Posted by Unknownprofessor at 11:55 PM 3 comments:

Email ThisBlogThis!Share to TwitterShare to FacebookShare to Pinterest
Labels: meetings

I'm probably beating a quickly dying horse, but I couldn't resist. The other day, I was talking with a colleague about the Occupy Wall Street issue, and came down on the side of the protesters, saying that the distribution of wealth in our country wasn't "fair" (actually, they said "equitable", but they pretty much meant the same thing. So, I brought up another colleague's Business Law class where if the students used the word "fair" in an answer, they automatically lost points. 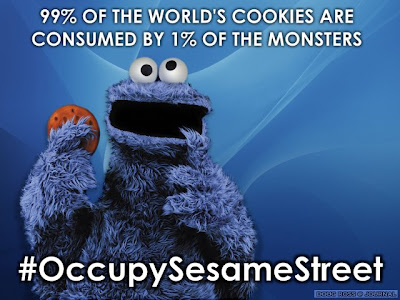 Fair is one of those words that seems to mean so many different things to different people that it's practically useless in conversation except as a rhetorical tool. When the Unknown Daughter was seven, we decided to expunge the use of the "it's not fair". The Unknown Wife and I told her that we didn't want to hear it, and whenever she uttered the phrase, she'd just have to "put it in THE BOOK". THE BOOK was a little journal with her name on it and the title "It's Not Fair". Whenever she used the forbidden phrase, she had to write it down as "It's not fair that______". She looked at the book, thought a minute, smiled at me, and wrote one (and only one) entry in the book: "It's not fair that they're my parents". She's pretty much never used the phrase since (yes, I have a remarkable daughter).

To close, let me give you two sites to peruse. In the first, We are The 99 Percent, the Occupy Wall Street Crowd posts their grievances, and in the second, We are the 53 Percent, some others post their responses. Feel free to chime in on either side.
Posted by Unknownprofessor at 8:29 AM 5 comments:

Honey, I'm Home (With a Jab at Occupy Wall Street)!

Financial Rounds went dark over the summer - I spent the time working on research, playing with The Unknown Wife and The Unknown Kids, and riding my bike. But now, I'm back. At present, I'm working madly to make some last minute changes to a paper to be presented at the FMA (Financial Management Association) annual conference in Denver. I'm doing it at the last minute (as usual), so I can't post much right now.

But this video pretty much screamed out for attention. It's a great parody of "The Times They Are A Changing", by Bob Dylan - one of the classic songs of my youth. It takes some pretty good jabs at the "Occupy Wall Street" crowd (not that that's all that hard), and points out how much capitalism has improved almost everyone's lot over the last century or so. Embedding seems to be disabled, but it's SFW, so click on the link and enjoy.

Here are the lyrics (See if you can spot the reference to the classic economics essay I, Pencil) :

They're saying that freedom
has done little to stop
Corporations from keeping
the wealth at the top
But at what point in history
would a kid and a king
both have clean water to drink?

George Washington was
the richest man of his age
But he lost all his teeth
at a very young age
Because they didn't have Scope
and they all crapped in trays
we're not wealthy?

Banks don't need bailouts
on that we agree
so let's start up a group
and let's take to the streets
because if we do that then
you know what that means
we're racist.

HT: Ace of Spades
Posted by Unknownprofessor at 10:40 AM 5 comments: