There Shall Be Only One (Bank, that is)

It's too early for March Madness, but here's a pool you can play if you're in the financial services industry - September Madness (click here for a larger version): 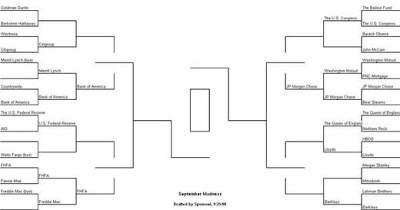 HT: Barry Ritholtx
Posted by Unknownprofessor at 11:54 AM No comments:

A Guide To The Economic Meltdown For Grad Students

If you're a graduate student and worried about how the recent economic turbulence effects you, fear not. The good folks at PhdComics.com have put together a handy guide (click on the picture for a larger version).

Posted by Unknownprofessor at 11:41 AM No comments:

Just to show that not everything in the financial markets is doom and gloom, it turns out that a very large new hedge fund just opened its doors.

HT: one of my readers.
Posted by Unknownprofessor at 9:52 AM No comments:

Buffett Buys A Piece of Goldman

It's a good time to be teaching Corporate Finance. Buffett's latest move (making a substantial investment in Goldman Sachs) is bound to make it into a lot of class discussions. The Wall Street Journal's take (at least, as expressed by Georgetown finance professor James Angel) is

Berkshire's plan "is a sign of confidence from one of the nation's most respected investors," said James Angel, a finance professor at Georgetown University, who added that "sharp investors" now are "sniffing around the wreckage of the credit crunch to pick up good assets on the cheap."

I think the second part of the statement is closer to the truth than the first. Here's what the Sage of Omaha gets for his money

The deal is structured in two parts, giving Berkshire a stream of cash and potential ownership of roughly 10% of Goldman. Berkshire will spend $5 billion on "perpetual" preferred shares of Goldman. These are not convertible into equity but pay a fat 10% dividend.

Berkshire also will get warrants granting it the right to buy $5 billion of Goldman common stock at $115 a share, which is 8% below the 4 p.m. closing share price Tuesday of $125.05. At Goldman's roughly $50 billion market value, based on that closing price, exercising those warrants would give Berkshire about a 10% stake in Goldman.

So, while the preferred isn't convertible, he gets what is essentially "synthetic convertible preferred". In essence, he gets his preferred payouts if the stock price doesn't rise, and the option to buy stock at a discount if the price is above $115. So, in effect he has a combination of preferred stock and an in-the-money call option. Barry Ritholtz prices the warrants at approximately $1.5 Billion, giving Buffett an effective yield of 14%, and cites another source who estimates their worth at $3.5B, and a yield of 17%.

Once again, Buffett has been able to make an investment at a very attractive price. In times where there's a lot of turmoil, having cash on hand makes it easy to buy companies (or parts of them) at a bargain, and according to Berkshire's first quarter, they had $31 Billion on hand. So, Buffett had cash at a time when Goldman desperately needed it. As a result, he got a great deal.

Just Damn. That guy is smart.
Posted by Unknownprofessor at 8:28 AM No comments:

This has nothing to do with finance. Absolutely nothing.

But it caught my eye, and I thought making a blog post with that title would be kind of fun. In addition (as Dave Barry would say), it would make a good name for a rock bank.

Enough bloggery. Time to torture some data.
Posted by Unknownprofessor at 12:19 PM No comments:

Another Crazy Couple of Days

It's been a busy few days. On Saturday, Unknown Son and I took part in his Cub Scout troop's annual popcorn sale outside a local supermarket.

I gave him a little coaching on the way over (i.e. make sure you ask everyone that comes out, look them in the eye, don;t take the first "no" without asking again, and so on). The kid absolutely hung the moon. He sold about 50% more than the other two kids that were there, and the grownups standing around really got a kick out of watching him. It's hard to say no to a determined, charming, and extremely cute 9-year old (of course, I'm completely unbiased).

Sunday was mostly used for prepping for my week's classes (I teach MBAs on Monday evenings, and other classes on Tuesdays and Thursdays). Unfortunately, U.S. started getting a fever Sunday night. We took him into the oncology clinic Monday morning (he had a regular appointment set up anyway), and they sent us home, feeling that it was likely a virus of some kind (no evidence of anything on his scans, and no signs of a bacterial infection). But, by the time I got out of class at 9:00, his fever was spiking to 103.

The doctor didn't seem to feel like he needed to come back in (it's about a 30 mile drive), so we gave him Tylenol, Motrin, and a cool bath, and his fever eventually broke around 1:00 in the morning.

So, I guess I start the week sleep deprived. What else is new.

ed: I had previously written that Unknown Son was 19. That's only in his ability to argue. Chronologically, he's only 9.
Posted by Unknownprofessor at 11:38 AM No comments:

I spent most of the last week working on a paper for a conference deadline on Monday. We managed to get the thing done Sunday night (I was in my office until 1:00 a.m. Sunday morning), and planned on submitting it Monday after one last quick read-through. Of course, on Monday morning we got an email announcing that the deadline had been extended. We should have expected it since this happens almost every year for this conference (the Eastern Finance Association annual meeting).

So, we gave the paper one last thorough going over. It was sent out today. It' s early, and the paper will need a lot more work (and polishing) before it's ready to submit to a journal. But the initial results look good, and it's always satisfying to have a finished version (even if it's preliminary) of a paper.

I like working with these coauthors. It's the first time I've worked simultaneously with two fellow alumni of the Unknown Alma Mater, and the initial experience has been very, very good.
Posted by Unknownprofessor at 7:40 PM No comments:

Email ThisBlogThis!Share to TwitterShare to FacebookShare to Pinterest
Labels: A Day In The Life, Academic Research, Conferences

I talk about the Intrade Political Futures markets a lot in my classes. They're a good example of how markets process dispersed information. There's a lot of debate about whether they actually predict many kinds of events or merely (in the case of the Presidential elections) merely react to polls. But despite that, they're a fairly simple market that's useful for demonstrating a number of concepts about markets (expected values, bud-ask spreads, trading volume, etc...).

Also, I'm a political junkie, so it's fun to see students in a finance class actually think about politics in a different way.

In any event, it now seems like the McCain for President contract and the Obama contracts have switched places (they're trading at $0.495 and $0.50 respectively). I always find it interesting to see how they react to various news events.

As an aside, I usually get a bit of a traffic spike when I post something on McCain, Obama, or the presidential elections. Unfortunately, it also results in a lot of fevered comments that I have to delete to protect all my many readers' (all three of them) delicate sensibilities.

Of course, if I did it for the traffic, I'd just mention that I have Sarah Palin Bikini pictures.

But that would be wrong. Very, very wrong.
Posted by Unknownprofessor at 10:35 AM No comments:

Damn The Data - Full Speed Ahead.

I finally got into heavy data grinding mode for a conference submission that's due on Monday. I should be done with my part of the work and will have tables to show today by 5. My coauthor is working on another paper with a deadline of tomorrow, so he won't even look at this stuff until Friday afternoon at the earliest. The deadline is not until until Monday, so we have time.

To do my part, I had to update the data set to reflect the latest year or so of data. I thought "this should be easy." That thought was four days and about 30 hours of programming ago. It turns out that the final data set resulted from three intermediate steps, which also required data sets to be updated.

The end result was that I ended up running programs last night at 12:00 in between watching Mixed Martial arts on TV. All in all it's not bad -- I'm a big fan since I did a bit of competitive judo college (pretty low level stuff, and I wasn't that good) and took taekwondo in high school.

But I'd have been happy to Tivo it for a reasonable hour if I wasn't already up dealing with data issues.

I once had a fellow grad school student who said that "empirical research is easy." If we ever cross paths again (he went into industry) I'm gonna go upside his head with a full hard copy of the SAS manuals.
Posted by Unknownprofessor at 1:21 AM No comments:

Email ThisBlogThis!Share to TwitterShare to FacebookShare to Pinterest
Labels: Academic Research, Rage Against The Machine, SAS

A Favorite Student Nails It

I just heard that one of my favorite undergrads (yes, I do have favorites) just accepted a job offer at a major banking firms (one o0f the ten largest in the country). He's an interesting profile: a so-so GPA (just south of 3.0), that was mostly due being an engineering major his first year and a half before switching to finance. But, he comes across as much better than his GPA - he's really passionate about finance, was president of our local FMA student chapter, and is a heck of a nice guy.

He somehow managed to get an internship at the bank this summer, and totally nailed it. That wasn't surprising, because he always did FAR more work in class than I asked, and always asked for more. He just got the offer (and accepted it ) today, and came into my office to tell me about it about 10 minutes ago. It was a pretty good one - mid 50s , a couple thousand signing bonus, and great benefits.

It just goes to show that internships matter - a lot. After he graduates, he'll be working in a temporary slot at the firm for six months until his training program starts. So, he figures it'll be a good time to knock out the CFA Level 1 exam (did I mention he really likes finance and isn't afraid of extra work?)
Posted by Unknownprofessor at 1:41 PM No comments: