I usually don't post political stuff (because of the moonbat factor). But I just got this from a former student and it tickled me, so what the heck. 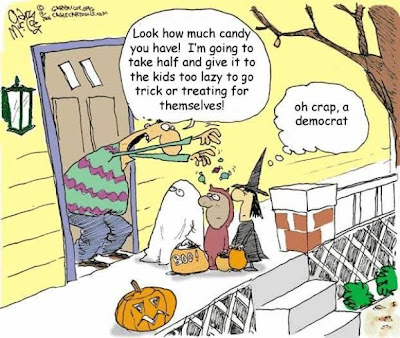 Posted by Unknownprofessor at 4:00 PM No comments:

I've always enjoyed Dan Barnett's writing and commentary, whether at SoxBlog, the Weekly Standard, or guesting on Hugh Hewitt's radio show. I just heard that he passed away after a long fight against Cystic Fibrosis. He was clearly one of the good guys. To get a small sense of the man, read this excerpt from his pamphlet "The Plucky Smart Kid With The Fatal Disease: A Life With Cystic Fibrosis"

As I grew sicker, I had what for me was an extremely comforting insight. I came to view serious and progressive illness as an ever constricting circle with oneself at the center. The interior of the circle represents the contents of one’s life. As the circle gets smaller, things that were inside get forced out. Some of these things are dearly missed; others that were once thought precious get forced to the exterior and turn out to go surprisingly unlamented.

t the innermost point of the circle are the things that really matter: family, faith, love. These things stay with you until the day you die. At the very end, because the circle has shrunk down to its center, they’re all you have left. But as we approach that end, we finally realize that all along, they were what mattered most. As a consequence, life often remains beautiful and worthwhile right up until the end.

A quick reminder: we're all born with a fatal ailment - it's called life, and no one gets out alive at the end. So without getting overly schmaltzy or preachy, we'd all do well to spend more time on that "inner circle" than Barnett wrote about.

To see a list of tributes to the man at the Weekly Standard, click here.
Posted by Unknownprofessor at 9:46 AM No comments:

Email ThisBlogThis!Share to TwitterShare to FacebookShare to Pinterest
Labels: Life

The Seven Deadly Sins of the Meltdown

Another thing for my "class" folder:

HT: The Big Picture
Posted by Unknownprofessor at 8:55 AM 1 comment:

Finance and Economic Courses on the Web on The Web

Increasingly, people are putting their lectures, teaching material, and (in some cases), entire courses on the web. Here are a few I've recently come across:

A Short Course In Behavioral Economics: Daniel Kahneman (yes, the Nobel Laureate) has recorded and posted videos of a two day conference called "Thinking about Thinking".

While surfing through Yale's Open Classes, I also found a class titled Game Theory, by Ben Polak, a widely published economist. He seems to cover all the big topics: Nash (and other) Equilibrium concepts, Adverse Selection, Signalling, and even Evolutionary Game Theory.

If you know of other finance/econ classes on the web, let me know in the comments section and I'll post them here.

Posted by Unknownprofessor at 2:36 PM No comments:

You Get What You Pay For: Designing Incentive Compensation Plans

While I'm not currently working in that area, I try to keep on on topics related to compensation design and effects. One of the ongoing themes of this literature is that a program designed to incent employees to do one thing often has unintended consequences. As an example, the Unknown Wife put me through grad school working for a cell phone company. At one point, she was a commission auditor - the job was important because salespeople often tried to make their quotas by miscoding things rather than by just selling more (I'm shocked! Shocked, I say!). So, they needed people like her to check everyone's sales.

There's a great piece on this topic by Joel Sposky in Inc magazine.. Here's a choice snippet:

I'm always on the lookout for these incentive schemes gone wrong. There's a great book on the subject by Harvard Business School professor Robert Austin -- Measuring and Managing Performance in Organizations. The book's central thesis is fairly simple: When you try to measure people's performance, you have to take into account how they are going to react. Inevitably, people will figure out how to get the number you want at the expense of what you are not measuring, including things you can't measure, such as morale and customer goodwill.

...His point is that incentive plans based on measuring performance always backfire. Not sometimes. Always. What you measure is inevitably a proxy for the outcome you want, and even though you may think that all you have to do is tweak the incentives to boost sales, you can't. It's not going to work. Because people have brains and are endlessly creative when it comes to improving their personal well-being at everyone else's expense.

He's got some great examples illustrating this point. Read the whole thing here.

HT: Craig Newmark
Posted by Unknownprofessor at 2:32 PM No comments:

Are Hedge Funds Good at Reading The Market>

The tentative answer seems to be "Yes".

According to a new study "Unbundling Hedge Fund Betas" by by Ulloa, Giamouridis, Mesomeris, and Noorizadesh there's evidence that hedge funds increase betas prior to market upswings. Here's the abstract:

This article is concerned with the systematic exposures of equity hedge fund managers. In particular we seek common equity hedge fund systematic exposures through rigorous model selection techniques. We study their time variance to examine if equity hedge fund style characteristics are stable through time. Most importantly, we explore the informational role of manager decisions to shift their exposures to certain styles. Our results suggest that equity fund managers are exposed to three dominant style strategies, namely the 'market', 'value' and 'momentum'. We also discover that there is a considerable degree of variability in the factor exposures over time for the various dominant sources of systematic risk/return. Finally, we show evidence that managers vary their exposures to the 'market' in time to exploit favourable market moves. A similar pattern is however not observed for their 'value' or 'momentum' exposures.

HT: All About Alpha
Posted by Unknownprofessor at 11:32 PM No comments:

A Hectic Couple of Weeks

It's been a crazy couple of weeks. Some good, some bad. But crazy, nonetheless.

About two weeks ago, I went to the FMA annual meeting in Dallas (it was great, by the way). I managed to connect with a lot of old friends, and also made a few new ones.

While I was there, I started a couple of new projects. Without going into too much detail, I think I've figured out a very creative way to use a data set in a new way. Just before FMA, I started a paper with a couple of grad school classmates that uses this data. While doing it, I realized a slew of different applications for the data and methodology.

In short, it's data that's typically used by researchers in one sub-field of finance, but I think it can be used to answer a number of corporate finance research questions. The data's pretty ugly, so it took a while to get it under control. But now that I've got a handle on it, I have more ideas to use it for than I have time to implement. So, I was looking for coauthors who could help out. Luckily, I have a lot of friends, so there were people willing to listen to the idea(s). As a result, I now have three new projects. They may be garbage and I might be totally deluded that this is a good idea, but I don't think so (or at least, I hope not).

Once I got back, I bought a "new" (to me) used car, taught in our evening MBA program one night and then twice in a neighboring city in a professional program, and had two family health problems.

Unknown Son had his surgical port removed (now that he's done with chemo, he no longer needs it, and it is a risk for infection). Unfortunately, what should have been a fairly straightforward half-day affair ended up with him staying overnight at the hospital due to some complications (he's fine now, by the way). Then, the next day Unknown Daughter came down with an intestinal bug that resulted in output from both ends.

In any event, I'm now giving an exam to my evening MBA class. Hey - I have to kill the 2 1/2 hours sometime, eh?
Posted by Unknownprofessor at 6:31 PM No comments:

Email ThisBlogThis!Share to TwitterShare to FacebookShare to Pinterest
Labels: A Day In The Life, The Unknown Family

SNP subsequently pulled the piece, but someone saved a copy here.
Posted by Unknownprofessor at 1:09 AM No comments:

I just heard an interesting story from a colleague (a former Wall Street lawyer who decided to become a lecturer at my university after retiring from his former career). I'm sure I'll be using it in class as an example of overreaction for the next few years (hey - I still talk about the Carter Years.

My colleague opened up his brokerage statement and noticed something verrrrry interesting (as Arte Johnson would have said).

He had two negotiable CDs - one from Washington Mutual and one from Lehman Bank. They originally had a 5-year maturity, but now had roughly 6 months until expiration, and were both under the FDIC limit. Here's the kicker - they were quoted at 92 and 93. In other words, you could buy them at 92% of face value, and would receive the full face amount at maturity 6 months later. This works out to a compound annual return of over 18% for the one quoted at 92, and about 15 1/2% for the one at 93. And this is for an FDIC-insured instrument.

So, he called his broker to see if there was an error. He was told that a significant number of people panicked when they saw the WAMU or Lehman name, and wanted to get out of their CDs at all costs. So, although the brokerage firm didn't advertise the fact, if my friend wanted to buy more CDs, he could have them at that price.

It's quite a story, and it illustrates how many people overreact in times of stress. 18% in a federally-insured instrument.

Simply amazing.
Posted by Unknownprofessor at 12:43 PM No comments: